Abu Faris Mawlay Abd al-Aziz ibn Mas’ud al-Dabbagh al-Idrisi al-Hasani (Sidi Abdul Aziz ad-Dabbagh; Arabic: سيدي عبد العزيز الدباغ‎) was a gnostic from the city of Fes born in the year 1679 (1090 AH). His family originated from the city of Salé in north-western Morocco, arriving in Fes at the beginning of the 1500s.

His teachings were recorded in a lengthy book devoted to him by his disciple Ahmad ibn al-Mubarak al-Lamati al-Sijilmasi (d. 1743/1156 AH) called al-Dhahab al-Ibriz min kalam Sayyidi al-Ghawth Abd al-‘Aziz al-Dabbagh (Pure gold from the words of Sayyidi Abd al-Aziz al-Dabbagh). This book has since been translated into English.

Shaykh Abdul Aziz was one of the first shaykhs to introduce the concept of Tariqa Muhammadiya which laid emphasis on achieving wakeful visions of the Prophet Muhammad ﷺ and recognising the essence of the Prophet ﷺ. The shaykh and his successors, Sidi Abdul Wahab al-Tazi and Shaykh Ahmad ibn Idris al-Fasi were all said to have met the Prophet ﷺ. About this, Sidi Muhammad ibn Ali as-Sanusi (d. 1859/1274), head of the Libyan Sanussiya Tariqa wrote:

All three teachers in this silsila (Dabbagh, Tazi and al-Fasi) took from and met the Prophet ﷺ, while awake and asleep and after their death, and in the last instance, none of them had any support except that of the Prophet ﷺ. This is one of the characteristics of the people of Tariqa Muhammadiya and a reason for it being so called, even though all [other] tariqas [also] return to the Prophet Muhammad ﷺ.

The Khadiriyya Muhammadiya Tariqa was founded by Moulay Abd al-Aziz al-Dabbagh in Fes in the beginning of the 18th century (11th century AH). It was internally and externally based on the lasting vision of the Prophet Muhammed ﷺ. The origin of this Muhammedan Spring (al-manba’a al-Muhammadi) appears in a wird (litany) that Sidi Abdul Aziz received from his Master Abul Abbas al-Khidr outside the sanctuary of the Patron Saint of Fes Abu’l Hasan Sidi Ali ibn Harzihim (d. 1116/559AH, teacher of Sidi Abu Madyan Shuayb al-Ghawth) in 1706 (1121 AH). His student Ahmad ibn al-Mubarak writes in his book al-lbriz: “our master al-Khidr (peace be upon him and our Prophet) had given his Shaykh, the succor of the age and our master ‘Abd al-Aziz al-Dabbagh, a litany with which to invoke seven thousand times each day. It was:

In contrast to the Shadhili, Khalwati, Naqshabandi and Qadiri Sufi orders which possess a doctrinal transmission (silsila) of a succession of shaykhs back to the Prophet ﷺ, Sidi Abdul Aziz ad-Dabbagh’s silsila went directly to the Prophet Muhammad through al-Khidr S, bypassing the early Sufi masters. Khadiriyyan Sufism was the Maghribi equivalent of the ‘Uwaysi’ methodology in the Mashriq.

Despite the fact that Sidi Abdul Aziz ad-Dabbagh inherited the sirr (secret) of his contemporary Shadhili master Sidi Ahmad ibn Abdallah al-Fasi (d. 1723/1129); the indirect master of Moulay al-Arbi Darqawi), his teaching focused on developing spiritual concentration on the “power of light” of the dhat (essence) of the Prophet ﷺ. He said:

The goal of the mystic path is illumination (fath)… Two kinds are distinguished: the normal fath and the ultimate, all-inclusive, al-fath al-kabir… Certainty (tahqiq) and real enlightenment only occur if the mystic passes through all the material and spiritual worlds and is honoured with the wakening vision of the Prophet ﷺ  (ru’yat an-nabiyyi yaqadhatan / mushahadatu ad-Dhat sharifa). After this experience, he is omniscient and permanently protected against error (ma’asum). His knowledge is far superior to that of all others, in particular to that of the theologians and the fuqaha… Attaining fath signifies that the partition between Dhat and Ruh has been removed: the enlightened individual has reached a state like that of the Prophet ﷺ.

Indeed this Way is based upon inner immersion, which is accompanied by modelling oneself on the Prophet ﷺ in word and deed, thus seeing him ﷺ as he is in flesh and blood, and engaging one’s tongue in tasliya (sending prayers upon the Prophet ﷺ) and busying oneself with uttering this at all times, in private and in public, so that it overwhelms one’s heart and that glorifying him, permeates one’s inmost being, so that one trembles by hearing him mentioned, and witnessing the Prophet ﷺ takes position of his heart and his outward figure appears before his inner eye. However, in order to experience a vision of the Prophet while awake, a person must be in a special mental state.

As for seeing our master Muhammad ﷺ in a dream (ru’aya), he said:

Sidi Abdul Aziz ad-Dabbagh passed away in the year 1719 (1132 AH) and was buried in the Bab al-Futuh Cemetery in Fes near the tomb of al-Anwar, between the graves of Sayyidi al-Darras ibn Ismail and Sayyidi Ali ibn Salih. A cupola was erected above his grave which still remains the same today. 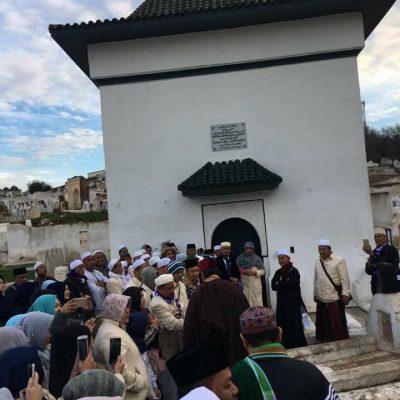 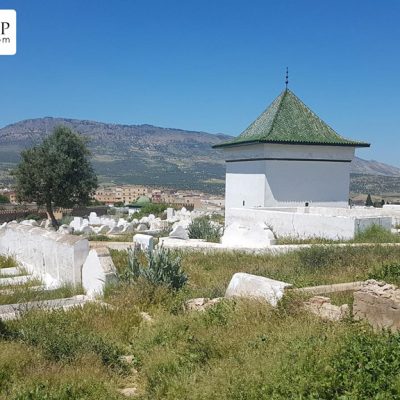 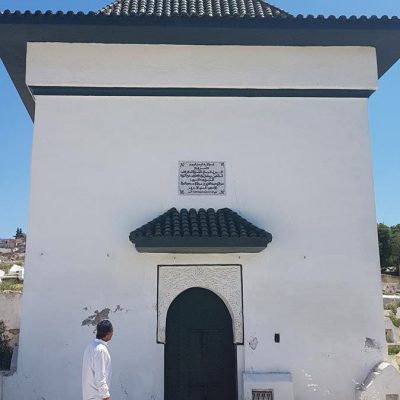 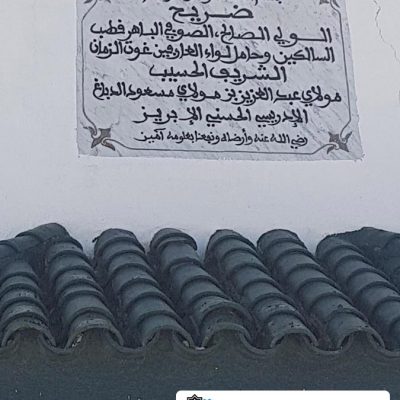