Imam Jazuli’s (Arabic: الإمام الجزولي) full name is Abu Abd Allah Muhammad ibn Sulayman al-Jazuli al-Simlali al-Hasani. He was from the far south of Morocco and belonged to the Jazula Berber tribe. He is renowned for authoring Dalail al-Khayrat, a precious compilation of prayers upon the Prophet Muhammad ﷺ, which has been read fervently by lovers of the Prophet ﷺ for hundreds of years.

Imam Jazuli is is one of the 7 saints of Marrakech and his tomb is one of the major mausoleums in Marrekech, visited by thousands of people each year. One of the special marks of his resting place is that a strong scent of musk can be smelt from his grave owing to the amount of prayers and blessings that are recited there.

His lineage goes back to Sulayman ibn Idris II ibn Idris I ibn Abd Allah ibn al-Hasan II ibn al-Hasan I ibn Ali ibn Abi Talib. He lived in a time of great political upheaval. There were questions over the legitimacy of the leadership of the Moroccan people, and attempts were made to overthrow the ruling dynasty and replace it with one descending from the Prophet Muhammad ﷺ. It was also a time of foreign invasions, with the Portuguese trying to make inroads into North Africa. In 817/1415 they captured Ceuta and within forty-five years all the country’s major ports, with the exception of Sale, were to fall into Portuguese hands. They also took Melilla (in 897/1492), and to this day both Ceuta and Melilla are under Spanish rule. It was a time for a call to arms against an invading power. At the same time there was great concern about the level of depravity Moroccans had fallen into. Clearly it was time for a change.

Imam Jazuli was a Berber from the far south of Morocco; he came from a region called Tankarat. As a young man he moved to Fes to continue his studies, as did many religious students in his time. He resided in Madrasat al-Halfawiyyin (the present Madrasat al-Saffarin), the oldest of the Marinid hostels, whose rooms were reserved for the students from the Sus region. In Fes Imam Jazuli memorised two major works on fiqh and usul: the Mukhtasar al-far’i of Ibn al-Hajib and Sahnun’s Mudawwana. He used to sit alone in his room, lock it and refuse to let anyone else enter. He would only leave to attend classes. Word reached his father, who was told the only reason he did not let anyone enter was that he had a great amount of wealth stored inside. Imam Jazuli’s father came to visit him, and upon entering he found the walls covered with the word ‘death’. His father remarked to the caretaker, “Do you see where this one is and where we are?” He soon left his son and set off back home. The room where Imam Jazuli stayed is still known today. According to some sources, it was there that Dalail al-Khayrat was written. Although it has been said that he compiled the work from books in the Qarawiyyin library, more reliable sources state that he compiled it some time after his participation in the defence of Tangier against the Portuguese in 840/1437. Imam Ahmad al-Sawi relates a possible motivation for the Imam’s decision to compose a book of prayers on the Prophet ﷺ.

One day Imam Jazuli went to perform his ablutions for the prescribed prayer from a nearby well, but could not find any means to draw water. While thus perplexed, he was seen by a young girl who called out from high above, ‘You’re the one people praise so much. Can’t you even figure out how to get water out of a well?’ She then came down and spat into the water, which welled up until it overflowed and spilled over the ground. Imam Jazuli made his ablutions, and then turned to her and said, ‘I adjure you to tell me how you reached this rank.’ She said, ‘By saying the blessings upon him ﷺ whom beasts lovingly followed as he walked through the wild’. Imam al-Jazuli thereupon vowed to compose the book of blessings on the Prophet ﷺ which came to be known as his Dalail al-Khayrat or ‘Waymarks of Benefits’.

Imam Jazuli presented the final version of this work to his disciple Muhammad al-Sughayyir al-Sahli (d. 917/1511-12) in 862/1457-8. This is the so-called Sahli recension, the standard one upon which all other copies are based. It is more than likely that the Imam began compiling the book upon his return to Morocco in 857/1453 and then revised it during the period in which he organised his Order.

After finishing his studies in Fes he headed south. It was in Dukkala that he met his spiritual guide, Abu Abd Allah Muhammad ibn Abd Allah Amghar al-Saghir (d. 850/1446), who was fighting against the Portuguese on the frontiers of Titin, in the region of Azmur. This sheikh took from the teachings of Abd al-Rahman al-Rajraji, whose spiritual lineage goes through Imam al-Hindi to Anoos al-Badawi to Imam al-Qarafi to Abu Abd Allah al-Maghribi, and back to Imam al-Shadhili. The Imam then went into spiritual retreat for approximately fourteen years.

By some accounts, after the death of his sheikh, Imam Jazuli left for the East, where he performed the Pilgrimage to Makkah and visited the Mosque and tomb of the Prophet ﷺ in Madina. There he is said to have spent three or four years in the Mosque of the Prophet ﷺ, where every day besides reciting his book twice he would also recite the Basmala 100,000 times and the entire Qur’an. He continued in this fashion until he became authorised to act as a spiritual guide. Imam Jazuli then travelled to Cairo, where he may have studied with Abd al-Aziz al-Ajami at al-Azhar University. He probably returned to Morocco around 857/1453, when he went to Fes, before returning to Asafi.

Imam Jazuli later came out to benefit people in the region of Asafi. He recruited his first disciples among the Awlad ‘Amr and other Banu Ma’qil Arab tribes in the Sus. He established a zawiya on the site of the 7th/13th century ribat of Abu Muhammad Salih. He and his followers resided around the ruins of the tomb of Abu Salih Muhammad al- Maghari in tents. The governor of the region later asked him to leave the region, fearing the influence he was gaining, and because of his speaking out against the authority for taking profits from the Portuguese. He moved on and settled in a region called Afughal in Mitraza, south of Essaouira. He made a prayer against the people of Asafi, and two years later the Portuguese took control of the city and expelled its population. They rushed to the Imam to seek his pardon; he told them that they would be granted forgiveness after forty years. So it came to pass, for in the year 984/1576 the Muslims regained control of Asafi.

Imam Jazuli spent no more than six years at Afughal. His name became known throughout the whole country and many people repented and entered the Path of the People of Allah at his hand. Before his death he left many people qualified to guide others, and it is related that he had over twelve thousand students in his lifetime.

He passed away in the second prostration of the dawn (Fajr) prayer, having apparently being poisoned, on 4 Dhu al-Qa’da 869/28 June 1465. He was buried in his mosque there after midday (Zuhr) prayer. The Imam did not leave any children.

After his death, Imam Jazuli’s more uneducated followers forced his closest companions out and his body was wrapped in a shroud; a man called Amr ibn al-Sayyaf al-Mughiti placed his body in a moveable ark instead of burying him. After establishing himself as the head of a messianic community, Ibn al-Sayyaf’s most pressing task was to eliminate potential opposition by avenging himself on those who could be blamed for Imam Jazuli’s death.

Conveniently, his wrath fell first upon those who were nearest and best placed to unmask the changes he had made to Imam Jazuli’s teachings: the Sheikh’s remaining Sufi disciples and the scholars of the region. Instead of being buried, Imam Jazuli’s body was left in the ark so that it could be taken on al-Sayyaf’s expeditions of plunder and murder, as a talisman of victory. (Ibn al-Sayyaf never lost a battle while the Sheikh’s body was with him). When not on the battlefield the ark was placed in an open-air ribat on the summit of a hill, where it was guarded around the clock and illuminated at night by large torches. All this went on for twenty years until the death of al-Sayyaf, after which the Imam was buried in Afughal.

Amr al-Sayyaf was eventually murdered by his wife in 890/1485. His two wives had decided to assassinate their husband for the sake of the honour of Islam, because of the corruption he had brought about. While he was sleeping they killed him, and then one of them threw herself from a window in the house; but she landed safely and managed to escape. The other wife remained in the house and was later executed.

In 940/1533-4, around seventy years after Imam Jazuli’s death, the reigning Sa’dian sharif Ahmad al-A’raj moved his body to Marrakesh in order to prevent restive tribe people from digging him up as they had buried him; the marks where his head and beard had been shaved on the day he passed away were still apparent. One of the people present placed his finger on his cheek and saw that blood was still under the skin. His body was completely preserved. There they buried him, and a tomb was built over his grave in 1133/1720. It is one of the major mausoleums in Marrakesh and is visited by thousands each year. One of the special marks of his resting-place is that a strong scent of musk can be smelt from his grave owing to the amount of prayers and blessings that are recited there.

The Imam wrote many works, the most famous being Dalail al-Khayrat, Hizb al-falah, and Hizb subhan al-da’im la yazal. May Allah be well pleased with him. 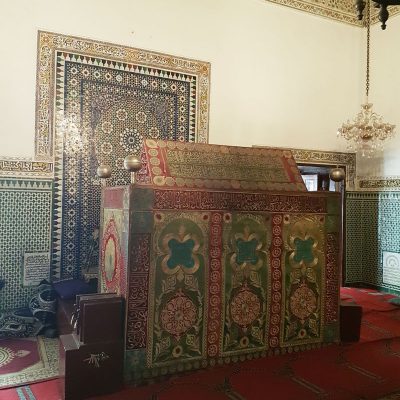