The great pole Sidi Abdelaziz ibn Abdelhaq Tabba’a is one of the 7 Saints of Marrakech. He was born in Marrakech and later moved to Fes where he became the spiritual successor of Shaykh Mohammed ibn Sulayman al-Jazuli. In Fes he gave sermons on tasawwuf and led Dalail al-Khayrat gatherings in the Al-Attarine Madrasa. He later founded the first Shadhili-Jazuli zawiyya in Marrakech. His spiritual successor was Sidi Abdallah al-Ghazwani.

His mausoleum is located at the top of the Rue Mouassine at the junction with Rue Riad Larrouss, a short walk from Riad Cinnamon. 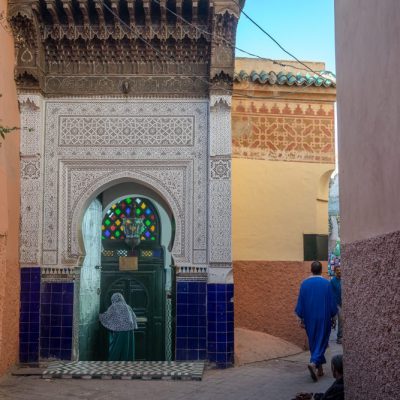